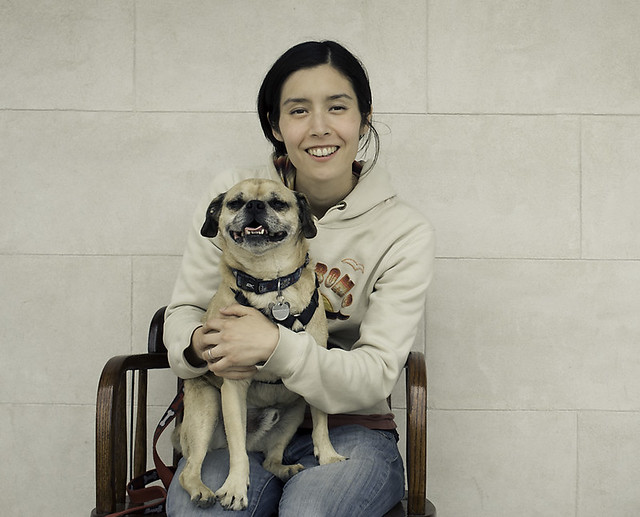 This week we chatted with Sharon Hardy, the photographer and brains behind Sweet Potato Pet Photos. In the latest installment of our interview series, Sharon discusses her transition from working for Conan O’Brien’s late night shows to becoming a pet photographer, her portrait style, and the countless outdoor backdrops Los Angeles has to offer.

Twenty Two: Let’s start with the basics. Can you tell us a bit about yourself?

Sharon: I live in Los Angeles with my husband and awesome dog, Chubs. After working in television production for 14 years, I recently started a business as a pet photographer.

Twenty Two: Have you always been interested in photography and working with animals?

Sharon: I grew up with lots of pets and have always been interested in animals. For most of my childhood, I thought I’d become a veterinarian, but finally realized that pets don’t really like the vet! I was also one of those kids who carried a camera around everywhere I went, mostly because I liked to document the lives of my family and friends. I never really took photography seriously, but became obsessed with movies and ended up going to NYU film school. It’s been convenient, though, that the composition and lighting techniques I learned for film production translates very well to photography.

Twenty Two: Can you describe the transition from working in television production to becoming a pet photographer?

Sharon: I worked for Conan O’Brien for many years, both at “Late Night” and “The Tonight Show.” When Conan’s “Tonight Show” came to an end, there was an eight month period before his new show started up again. I’d always wanted to volunteer at an animal shelter and realized that was the perfect opportunity to do so. Because I kept up my interest in photography, I asked a few animal shelters and dog rescue groups if they were interested in a volunteer photographer. Happy Angels Dog Rescue and the Santa Monica Animal Shelter were really excited about getting great headshots of their animals and I found that I absolutely loved doing it. I’m still volunteering for both, and that experience got me thinking about doing pet photography as a career.

Twenty Two: How would you describe your portrait style?

Sharon: I like to make my pet portraits very natural – the way their human moms and dads see them all the time. I don’t use sets or costumes. Instead, we shoot either at their home or an outdoor location that suits their personality. If they are a very active pet, there will be more shots of them playing and running around. If they are very calm, there will be more shots of them just hanging out. I love getting their human parents involved in the sessions, as well.

Twenty Two: Do you use any specific tricks that make working with pets easier?

Sharon: The most important thing before starting a shoot is to make the pet feel comfortable. It will be a long, arduous process if they’re not having a good time. Some pets just need a couple of minutes to get used to me and the camera, while others may need half an hour. After they’re comfortable, it’s finding out what makes each pet happy. It could be a tennis ball, tasty treats, or just crazy noises. And they’re very similar to children – frequent breaks are important!

Twenty Two: How do the experiences of shooting an animal from a shelter versus a pet with a home differ?

Sharon: When shooting for an animal shelter, my goal is to provide a nice, clear representation of each pet. I aim to get a great close-up of their face, a nice wide shot of their whole body, and something that describes their personality a bit, whether it be chewing on a toy, chasing a ball, or rolling around on their back. The goal is to make them look great and get adopted. For a pet with a home, I do all of the same as a shelter pet, but also add in shots with more artistic composition and lighting, as well as details that a human parent would love, like close-ups of their feet or the curl of a pug tail. I will also incorporate their environment much more, whether it be their home or a favorite outdoor location.

Twenty Two: Can you describe your most memorable portrait session?

Sharon: I had a session recently with a beautiful ten-year-old boxer and his human mom and dad. He was a real momma’s boy, having been raised by her since he was a puppy. It was obvious that they all loved each other so much. We went to a beautiful location in Malibu at sunset. What made it extra special was that his mom and dad wanted to be involved in the photo shoot, as well. I love taking family shots!

Twenty Two: How has living in Los Angeles influenced your work?

Sharon: When living in Los Angeles, you’re really missing out if you don’t take advantage of the many great outdoor locations available. I spend a lot of time scouting locations that would suit different pet personalities. When looking for a location, I have to think about both the vibe of the place (serene, urban, beachy, etc.) and whether it’s a practical location for that particular pet. Some pets do very well in crowded areas, whereas others need it to be very quiet and peaceful. Luckily, there is a huge variety of locations in Los Angeles.

Twenty Two: When you’re not working, how do you spend your time?

Sharon: I love spending time with my husband and dog. We love going to the beach, hiking, and visiting cool independent food joints around town. We always bring Chubs everywhere we go, so it has to be dog-friendly. And at night, we like to cook and watch movies at home.

Twenty Two: What can we expect to see from you in the future?

Sharon: I’m interested in going back to my roots and incorporating video in my shoots, so I think that will be something I get really into in the near future.

A special thanks to Sharon for giving us the opportunity to learn more about Sweet Potato Pet Photos. You can keep up with her by checking out her website, Facebook, Twitter, and Google+.

Click on the images below to see more from Sweet Potato Pet Photos.