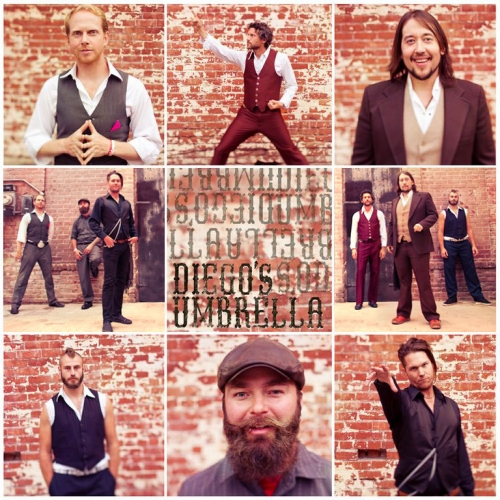 This week we chatted with Benjamin Leon of Diego’s Umbrella, a gypsy rock band based out of San Francisco. In the latest installment of our interview series, Benjamin discusses the band’s unique sound, working in a sextet, and how he spends his free time.

Twenty Two: Let’s start with the basics. Can you tell us a bit about yourself?

Benjamin: My name is Benjamin Leon. I’ve been playing music since I was about 6 years old, from piano to drums, and then later I picked up guitar and started singing. I’ve known Tyson and Vaughn for about ten years, but I was playing in my own group in Los Angeles for most of that time. They knew I was burning out in LA so they kidnapped me at a Pinkberry in 2008 and we’ve been riding around in a van together ever since.

Twenty Two: Have you always been interested in music and performing?

Benjamin: As a little kid I was hoping to make a career out of reading comic books, but since high school, yes.

Twenty Two: Each member of the band has coined a colorful title, like Jason Kleinberg the Gypsy and Jake Wood the Samurai. What’s the story behind these names?

Benjamin: Everyone in this band is a weirdo. The members’ titles reflect that. Kleinberg, in fact, is so weird that he has about 40 different titles and pet names. Most of those are less print-friendly than “The Gypsy.”

Twenty Two: Diego’s Umbrella has been touted as San Francisco’s Ambassadors of Gypsy Rock. Can you speak more about this?

Benjamin: We were flipping through the San Francisco Yellow Pages, and Gypsy Rock wasn’t yet claimed here. We seized the opportunity.

Twenty Two: How would you describe the band’s sound?

Benjamin: We call it Gypsy Rock. To be specific, it’s a bunch of big, danceable pop-rock songs, tricked out with flamenco guitar and gypsy fiddle. It’s a good time.

Twenty Two: What are some of the difficulties you encounter as a sextet when you’re working on new music? Is there a lot of headbutting?

Benjamin: Less than you might expect. We’ve become more organized, particularly over the course of making, “Proper Cowboy.”  Vaughn, Tyson and I workshopped all the tunes, and a bunch that didn’t quite make it, until we were satisfied, and then we would hustle them into the studio.

Twenty Two: What can our readers expect to hear on your latest album, “Proper Cowboy”?

Benjamin: We have dubbed it a “Futuristic Spaghetti Western,” which feels pretty accurate to me. However, Roger Ebert said, “It’s like Gogol Bordello, Muse and Skrillex smoking electronic cigarettes while skating a half-pipe on the moon.”

Twenty Two: Where do you find inspiration?

Benjamin: We get a huge charge out of our fans. We love playing live and getting people off with what we do. We are always trying to think of what new angle, hook, sound or visual will get people cranking harder than before.

Twenty Two: How has living in San Francisco influenced your work?

Benjamin: I don’t quite know how it has crept into the work for me personally, other than to say I love it here and I hated living in LA. Every day that I wake up in San Francisco I feel incredibly grateful.

Twenty Two: When you’re not working on music, how do you spend your time?

Benjamin: I keep it pretty simple. I watch a lot of movies. I like to cook, write, spend time with the lady. We are on the road so much, and in loud, drunken places so often that I savor the peace and quiet of home life when I can get it. I know not everybody in the group is that way; Tyson is still a party animal when he comes home.

Twenty Two: What can we expect to see from you in the future?

Benjamin: The show is always getting bigger and better, and I think it’s going to go very big in 2013. Maybe a ritual sacrifice every night, or even a live birth. Also a team-up album with Dolly Parton.

Twenty Two: Do you have any advice for aspiring musicians?

Benjamin: Work your ass off, and keep working your ass off. And team up with people who work hard — don’t bother carrying dead weight. I am fortunate to have fallen in with such hard-working people.