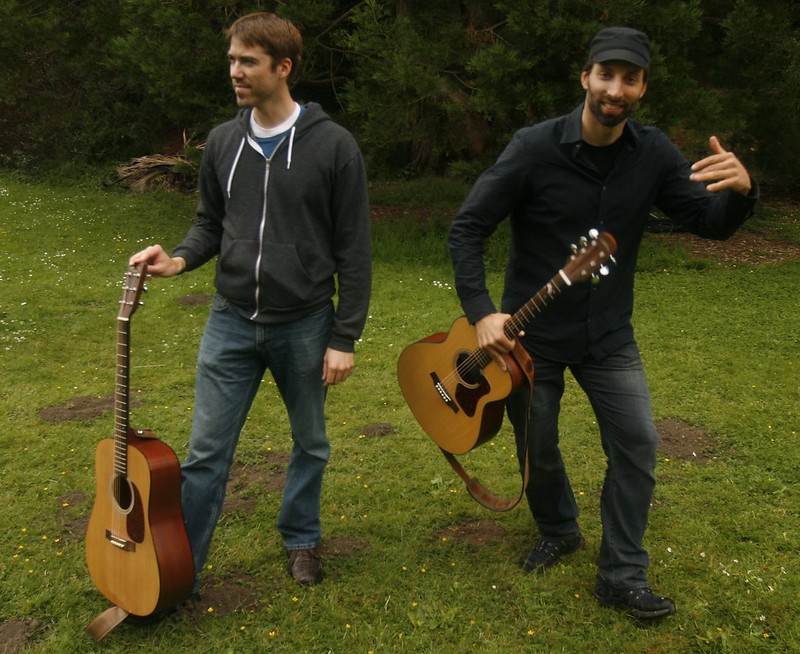 This week we chatted with Zej Kozlowski and Calen Perkins of Zej & Calen, an acoustic guitar-driven duo based in San Francisco. In the latest installment of our interview series, Zej and Calen discuss their global backgrounds, their new album, and SF as an indie music breeding ground.

Twenty Two: Can you tell us a bit about yourself?

Zej & Calen: We’re two independent singer/songwriters that have our own stories to tell and we realize that coming together we can make them come alive. Zej grew up in Switzerland and has lived in South America and five countries in Africa. He is a nature fanatic, and likes imitating foreign accents. Calen is from New England, cheers for the Red Sox and is pretty sarcastic. He moved to San Francisco to be in an exciting, creative environment and to develop his songwriting. We met at one of Zej’s shows and became friends first (isn’t it always better that way?).

Twenty Two: How would you describe your sound?

Zej & Calen: Acoustic guitar-driven with lots of harmonies. Two guys with two guitars incorporating folk, rock, Americana, and world sounds. Our music has elements of Neil Young, Bob Dylan, Jack Johnson, and Iron and Wine, for example. We like performing the same way we enjoy experiencing our favorite performers — playing solo or in a really stripped down setting where you can hear every nuance of their voice and instruments.

Twenty Two: What’s the process you go through when you’re working on new music?

Zej & Calen: We each typically write a nearly complete song and present it to the other. Their facial expression while this is happening determines whether it becomes a duo song or not.

Twenty Two: What can our readers expect to hear on your album, “Last Station”?

Zej & Calen: This project gave us the opportunity to create a more elaborate arrangement with lots of vocal harmonies, upright bass, percussion, fiddle and layered guitar riffs that we aren’t able to do when we play live as a duo. We decided to co-produce the record with our sound engineer, Scott McDowell. We came up with a list of tracks for him to use as a reference in shaping the album’s sound from artists like Bon Iver, Kings of Convenience and Alexi Murdoch, who we had been listening to a lot at the time.

Twenty Two: Where do you find inspiration?

Zej: Some of the songs on our new record are a response to what we are doing to the earth, and for me represent an attempt to connect to the spiritual aspects of who I am as an environmentalist. Also, music is like psychotherapy. For anything that’s troubling you, sing about it and you’ll feel better.

Calen: Music itself is inspiring for me. I pick up an instrument and just enjoy hearing what kinds of sounds I can get it to make. I write songs to help work through questions or reactions I’m having to something, or sometimes simply to have fun.

Twenty Two: Whose musical career would you like to emulate?

Zej: I once saw Richard Shindell, whose folk songwriting and performing I respect tremendously, in concert in Berkeley. I walked up to him afterwards to say hello. I knew he was living in South America at the time, as I had done for a few years, so I conversed with him in Spanish and we bonded over those experiences. Shindell is a master of writing songs that tell stories from another individual’s perspective. One song on our record, White Bear, follows this style. Though he doesn’t know it, he’s been a significant mentor.

Calen: It’s important for me to feel that a performer is being honest with me and standing up for things they believe in, both in their writing and the way they carry out their careers. I love following people like Brett Dennen and Ray LaMontagne because you can just feel the authenticity of their values and personality come out in everything they do.

Twenty Two: How has living in San Francisco influenced your work?

Zej & Calen: We feel some of the best music in the country is being made right here in our own backyard, and we’re lucky to be in such a supportive music scene and to have befriended some really talented local musicians. We’ve gotten to know drummer Andrew Laubacher and bassist Jonathan Kirchner over the last few years. After admiring their playing with Kelly McFarling, Con Brio and Goodnight, Texas, we invited them to be our rhythm section on the new album, which was a treat. And our friend Kelly McFarling has been a mentor to us in many ways and even recorded harmony vocals on a couple songs on the album. The folk music scene in SF has also really rooted in us the belief that you can play traditionally influenced music for modern audiences and have success if you work your butt off and do it in interesting ways.

Twenty Two: When you’re not working on music, how do you spend your time?

Zej & Calen: Zej started a benefit concert series, “Kangaroo Concerts,” that brings environmentally-conscious singer-songwriters and their fans together to support environmental causes. He also works with foundations to facilitate international philanthropy. Calen works for a large non-profit in San Francisco on energy-efficiency and environmental sustainability projects.

A special thanks to Zej and Calen for giving us the opportunity to learn more about their music. You can keep up with them by checking out their website, Facebook, Twitter, Soundcloud, and Bandcamp.

See Zej & Calen live in concert on Sunday, October 27 at 8:30pm at The Starry Plough in Berkeley. Click here for the Facebook event details.